What are the Dangers of Welding Fumes? 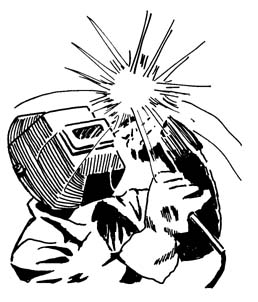 There are many faces to the world of welding, but they all risk a similar danger: exposure to welding fumes. Is welding smoke harmful? For a better understanding of the dangers of welding fumes, we need to look at the chemicals being released into the air during the different stages of welding. The horrors of inhaled welding fumes involve many conditions, from mild to serious, including neurological damage, various lung complications and infections, irritation, Metal Fume Fever, and even cancer.

These conditions are caused by various chemicals that are released in a welding environment. Some of the hazards and dangers of welding fumes include:

Zinc
Zinc is the culprit behind Metal Fume Fever, which mimics the symptoms of influenza. Metal Fume Fever appears to strike most workers at the beginning of the week or after a vacation. It’s thought to subside within 24 hours and, though it is not a major threat, it is still a nuisance to the health of many welders.

Mercury
Mercury can cause very nasty health problems. It’s a known danger when inhaled, whether in a welding environment or elsewhere. Some of the complications that can arise with long-term inhalation of mercury are emotional instability and hearing damage. It can also cause various stomach problems and (eventually) tremors.

Beryllium
High exposures of beryllium can cause chemical pneumonia, which is inflammation of the lung tissues from toxins. It can also cause weight loss, fatigue, and weakness.

Cadmium
Cadmium can cause a number of terrible ailments, infections, and illness, and can even lead to death in high doses. It is considered a human carcinogen by various sources, including OSHA.

Manganese
A very large concern for welders is an overexposure to manganese. Manganese, inhaled in high doses, has been known to cause neurological damage. One condition associated with it is a mimic of Parkinson’s disease, which causes tremors and loss of muscle control.

OSHA has advised that welders avoid confined spaces, and employers are required to inform their workers of these welding dangers before they begin work. They also recommend cleaning coatings that could introduce toxic exposure and staying upwind when working in an outdoor environment. Proper ventilation during welding is of utmost importance. A well ventilated facility could save lives and decrease the risk of metal fume fever, injury, illness or death in a field where countless lives are constantly on the line. Contact DualDraw today to figure out how we can help keep your employees safe from these welding dangers.

REQUEST A QUOTE
Go to Top