The following article was written and posted on the Hazardexonthenet.net Websiteon February 28th 2013. This article shows the importance of businesses following the safety codes that are regulated by organizations such as OSHA & NFPA. 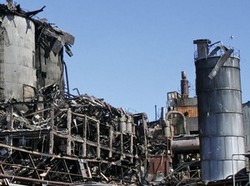 There was not enough evidence to prove that the company intentionally had lax safety requirements, he said.

In 2010, Imperial paid more than $6 million in fines relating to safety violations at the Georgia refinery and its plant at Gramercy, Louisiana. It originally faced investigations by the US Chemical Safety Board, the Occupational Health and Safety Administration (OSHA) and the Bureau of Alcohol Tobacco and Firearms.

The dust explosion on February 7, 2008, was caused by an accumulation of sugar dust on surfaces within the Port Wentworth plant, killing 14 and injuring a further 36, some seriously.

OSHA accused Imperial Sugar of 221 safety violations before agreeing to the $6m fines. Imperial Sugar said it admitted no wrongdoing by settling the case.

Federal investigations launched after the explosion determined that Imperial Sugar had been warned about dangerous dust inside the Georgia plant as recently as 2002, and that prior warnings had been issued since as early as the 1960s. The refinery is the second-largest in the U.S. and has been operating for nearly a century.

REQUEST A QUOTE
Go to Top